2 Conflicts, 2 Articles, and 2 Conversations Worth Having About Race and Black History Month 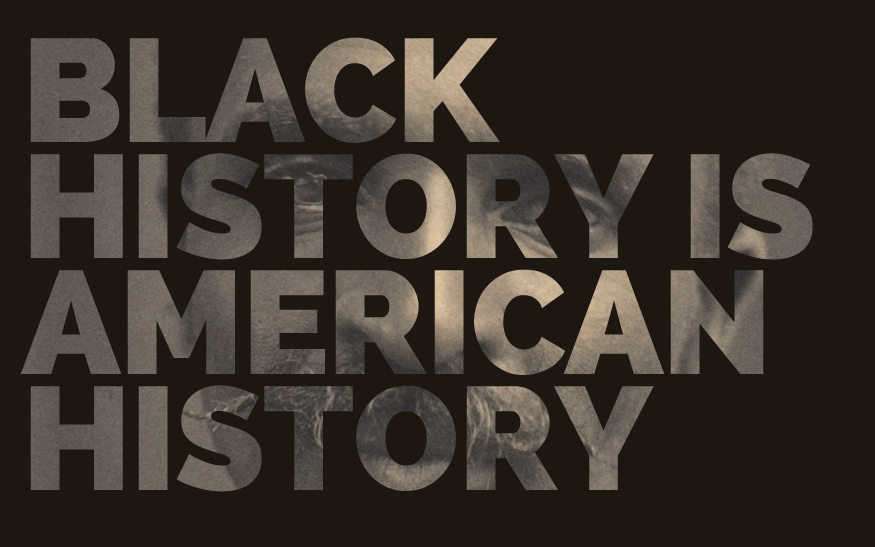 About two weeks ago I was having a conversation with others in which we were asked to identify our ancestry in terms of racial heritage and background. I listened to some of the participants who identified as white talk of their lineage from their native countries, and share some of the experiences that were passed down to them from family about their ethnic backgrounds. However, when my turn came, I noticed that I wasn’t able to offer nearly enough background, and much of the history that I can recall starts here in the U.S.

Although I know that it will take a lifetime’s worth of work to catch up, to this day, I am still resentful of how little I know of African History and African-American History. Much of what I do know that exists outside of what is popularly taught, I learned when I attended college, and I had to dig really deep to gain access to that information. This first article speaks to that conflict.

From The Huffington Post: Black History Month Has Been an Epic Failure 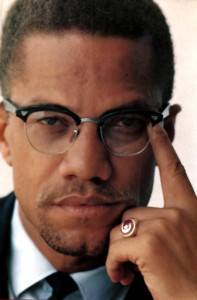 “Malcolm X was fond of saying, “Our history did not begin in chains.” Yet every year that’s where Black History Month lesson plans in schools across America begin. They begin telling the story of our history — black history — in chains.

Young black school children don’t learn that our people mapped, calculated and erected some of the greatest monuments ever, like the pyramids, the sphinx and the obelisks (after which the Washington Monument is modeled) or that our people were literally the lifeblood of some of history’s greatest civilizations. They don’t learn that calculus, trigonometry and geometry all trace their origins back to African scholars.”

“Our history isn’t taught in popular culture and it is conspicuously absent from the history that most professors in high school classrooms and on college campuses deem to be important. That’s why Black History Month was created. It wasn’t a chance to glow over the achievements we’ve heard about time and time again and to recount stories of the Bad Ol’ Days and what we did to get through. Black History Month was a time to bring to light the stories of people from Africa who have contributed so much to who and what we all are today in human society.”

(Carter G) “Woodson, one of the first black men ever to graduate with a Ph.D from Harvard, doing so in 1912, was devoted to teaching all people about the contributions in our society that come from Africa and Africans, and it pains me to say, so far we have failed in his mission.

If you don’t believe me, find anyone still in school, I’m talking K-12, and ask them to tell you something about black history that predates the slave trade.”

“The march from slavery and the Civil Rights Movement clearly demonstrated the struggle and the power that black people are capable of, but it’s not all we have contributed to the world.
It’s time we used the month of February to extend the dialogue beyond that banal and onto the tremendous accomplishments of Africans throughout history who have advanced math, music, language, the sciences and so much more for thousands of years. Then and only then will we truly be celebrating Black History Month.”

Read: “Black History Month Has Been an Epic Failure”

On another side of this coin, this next article reminds me of experiences I had as an undergraduate student serving as an Executive Board Member of The Association of Black Students on campus where I would sometimes hear some students who were white ask questions like:

“Why isn’t there an association of white students?”

“The idea of a Black History month is racist. How would you feel if there was a white history month?”

Well, this next writer entertains the idea of what a comprehensive white history month could look like.

From the Guardian: Why America Needs White History Month 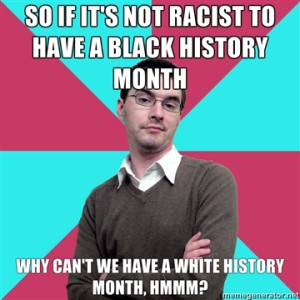 “For anyone who speaks on issues of race publicly, the idea has long been a joke – a retort thrown at you from frustrated white folks who believe they are being discriminated against because there doesn’t exist a special month set aside to celebrate their racial identity. They cry foul at the notion of Black History Month, Black Entertainment Television, Black Enterprise and everything else with “black” in the title – even, sometimes, going so far as to say these things are racist in nature because their names and missions are “discriminatory”. It’s preposterous, but they counter that they need a White History Month to provide balance and equality.”

“After laughing this off for years, I’m now on the same page.

I don’t mean White History in the same way we (attempt) to celebrate Black History during February, or Women’s History in March. Where these are intended to correct an imbalance in the way history is celebrated from an overwhelming white male perspective, White History Month need not rehash the tales of great white heroism. We need a different approach here.”

“Most of the history we learn is built on myths….The myths of white American history perpetuate oppression and inequality. They instil in white America a false sense of self-imperviousness to facts or logic.”

“Whiteness has its privileges, and among them is that your view of history is through that of the default, the conqueror, the triumphant. And when you can see history through that lens, you don’t have to be burdened with understanding the consequences of your triumph from the perspective of those who were stepped on during the conquest.”

“White America needs their myths interrogated, deconstructed and ultimately replaced with a new history altogether. Like Black History Month, a White History Month would be unable to cover all the territory needed to accomplish such a feat in so short a period of time. One would need to do so around the clock, around the calendar.”

For me, these two articles represent two different conflicts; feelings of loss and frustration at the lack of access to accurate information about the histories and contributions of peoples of the African Diaspora, and the tension and pushback that ensues because of the threat uncovering these truths poses to long-held dominant narratives of world history and “American” history; narratives that often tell tales of White heroism and victory over the uncivilized “other”.