“We’ve constructed an idea of masculinity in the United States that doesn’t give young boys a way to feel secure in their masculinity, so we make them go prove it all the time.”

Stopping themselves from showing emotion, hugging, or touching another man because of how they thought it might look, having gotten in fights in order to prove that they were a man, and having been physically injured yet feeling as if they needed to hide the pain were among many other experiences shared by a group of men I had the chance to work with recently.

As we talked about common messages that we’ve been taught about what being a man is supposed to look like, I was reminded that adhering so closely to those rules and expectations often means wearing a mask, being fake, living a lie. The key to emancipation lies in challenging those false notions, discarding them, and making room for new ways of thinking and being. In the spirit of critical thinking, I share this old post.

Recently, I came across a collection of tweets shared on Facebook that demonstrated the impact of toxic masculinity at work.  Take a moment to read through the images in the post below before continuing.

“I’ve been trying to explain this experience and how, as a woman, it doesn’t matter your intentions (as a man), this is not cool. It’s not flattering. It’s not attractive. At the very least, it’s annoying. But a lot of times we feel threatened and afraid.”

Men, we need to listen intently and not be dismissive of these experiences. We also need to talk to each other about the sense of ownership and entitlement to access to women’s time and bodies that is so deeply entrenched within the ways we are often socialized, recognize it as a problem, change our own behavior and check each other.

From single killings to mass shootings, women have died and continue to die because the sense of masculinity of some man was so fragile that they couldn’t possibly grasp the reality that the person, read as “object” of their desire in that moment didn’t respond, submit, obey, comply to their demands for access.

“Toxic masculinity and the sense of entitlement that comes with it is often maintained through violence, or the threat of violence. Toxic masculinity was a key issue in the plot of the episode, but you don’t need to watch a tv show to know that it is also a key underlying issue in much of the violence, including gun violence that has been taking place around the country.

How many mass shootings have we had this year by white males angry because they were rejected from women; angry because their immediate demand for time, attention, and ultimately access to women’s bodies was denied?”

–From my note: On Toxic Masculinity and Violence

“Nice guys” who feel like we’re owed something for being decent human beings are also implicated in this. And this person’s sharing also highlighted the temper tantrum that happens in a man when being “nice” is a tool of manipulation; a means to an end, a *gift with conditions.

All men are implicated in this, including myself, as we either actively or passively perpetuate this behavior when we’re not challenging it. Every joke, every meme, every action uninterrupted allows this. Every “not all men” invalidates their reality, and dismisses our complicity and responsibility.

In addition to the devaluing of women, patriarchy: the same system and set of rules that teach us that it’s not okay to cry when we are sad or upset; that teach men that displaying any sort of emotion outside of aggression and anger is a sign of weakness, is also inherently homophobic and transphobic.

Cisgender Women, and people in the LGBTQIA+ community are devalued and dehumanized day in and day out because of patriarchy, and the tools used to perpetuate it such as sexism, homophobia, transphobia and toxic masculinity, but there is also a loss, albeit in a different way on the part of the perpetrators who in perpetrating inhumane treatment, lose a very important aspect of themselves. 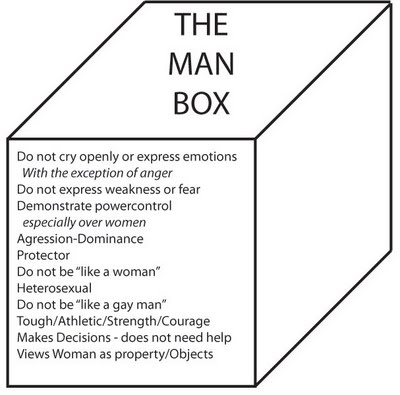 How can we interrupt this cycle of socialization? Toxic masculinity is a Macro Social Work issue.

Crossposted from my other site. The post continues there.