Dealing with Conflict: A Tale of Monsters and 2 Wolves

“He who fights with monsters might take care lest he thereby become a monster himself.”—Nietzsche

While watching the news the other day, a thought popped into my head. You know, it’s funny how sometimes, when we feel as if we’ve been wronged in some way, in our response in an attempt to “right” that wrong, we can sometimes find ourselves doing the exact wrong thing that was done to us to someone else.

For instance, I was on the freeway the other day preparing to switch lanes. As I began to make my way over to the right lane, I was cut off by another car and narrowly escaped getting into an accident.

For some brief moments afterwards I was so stuck and frustrated thinking about what had just happened, and what could have happened, that before I knew it, I heard a horn honking.

Ok, so that was just one example, but lately I’ve been reminded of a more complicated example in the aftermath of the attacks that took place on September 11th, 2001.

While it is well-known that the events of that day and the lives lost will continue to have a lasting impact in the lives of citizens in the United States and abroad, in responding to the feelings of anger, fear, and loss left in its wake, some Americans reacted in violence or acts of prejudice against other Americans who were in no way responsible for what happened.

The Unheard Voices of 9/11 campaign was launched by the Sikh Coalition, the largest Sikh civil rights organization in the United States to highlight the backlash of discrimination and violence  toward Muslims and those perceived to be Muslims that followed the September 11th attacks.

Even today, American citizens who fit into a certain stereotype continue to be targeted for hate crimes, employment discrimination, and school bullying by ordinary citizens, and profiling by law enforcement agencies.

Here, Rabia Said remembers an experience she had with discrimination when she was eight years old.

The organization South Asian Americans Leading Together (SAALT) created a video campaign asserting that America is for all of us.

In an attempt to “right” what was wrong, those actions instead served and continue to serve the cycle of wrongdoing.

“An eye for an eye makes the whole world blind.”—Mahatma Gandhi

Something important to point out in thinking about my highway fiasco, the acts of reactionary discrimination, hate crimes, and other situations is the fact that the victims were in no way responsible for the wrong that the perpetrators experienced previously.

This realization also reminds me of how important it is to continually work towards managing myself and my emotions.

Anger, and even fear can cloud our better judgement, give us “tunnel vision” and keep us from seeing the truth.  In some cases, it can drive us to seek “satisfaction” no matter what the cost.

Can you think of times in your own experiences where you might have thought about or behaved in the same manner towards an entirely different person because someone or something else may have upset you?

A friend of mine shared an interesting story about conflict with me recently that I’d never heard before. It’s the story of Two Wolves.

While sitting around a camp fire, a grandfather said to his grandson “Child, I’m struggling. There are two wolves engaged in a fierce battle inside of me.”

“The other wolf is good, and is fueled by joy, peace, love, hope, serenity, humility, kindness, benevolence, empathy, generosity, truth, compassion, and faith”

In awe after hearing this, the grandson said “Wow Grandfather! Which wolf wins?”

The Grandfather simply replied: “The one I feed.” 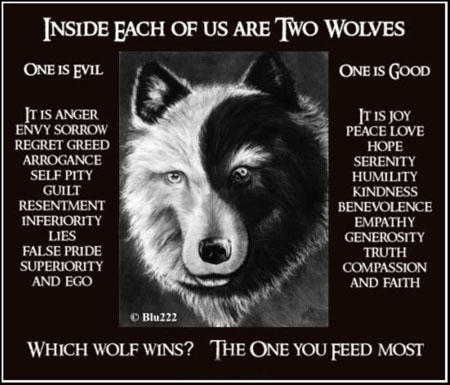 Where aspirations to become a better humanitarian can factor in

Personally, I struggle with thinking in absolutes when it relates to concepts such as  “good” and “evil” because of a societal tendency to dehumanize folks who don’t fit into a well established mold of what is considered “right” by the powerful.

However, I didn’t allow my reservations to hinder me from getting the point.

I enjoyed hearing this story because it caused me to think of my own personal battles, the choices I make on a daily basis, and also of how important it is to remain self-aware, especially in conflict.

In thinking of the story moving forward, a task that I’m setting for myself to help me avoid “becoming a monster” in navigating conflict, as well as making life decisions is to work be able to continually ask myself:

“Which wolf am I feeding?”

One aspect of my aspiring humanitarianism is the ongoing process of  living intentionally by working to ensure that my actions are in line with my values.

Even still, sometimes I stumble. Sometimes I fall short. I think we all do from time to time. Working to become a better human is a lifelong process.

In dealing with conflict, self-awareness can help us avoid becoming a part of the problem we’re trying to solve. Support me, as I support you in this ongoing battle with self.