From the Kupcakes and Kyriarchy blog--Interplay in Intersections

A Resource for Dialogue: 30+ Examples of Cisgender Privilege 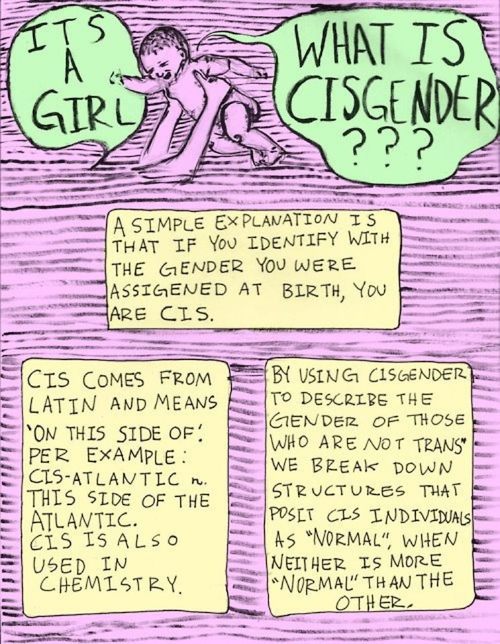 From the Kupcakes and Kyriarchy blog–Interplay in Intersections

From The Kupcakes and Kyriarchy tumblog: 30+ Examples of Cisgender Privilege–

Here’s an excerpt from a list of unearned benefits that come with being cisgender.

Following is a list of cisgender identity privileges.  If you’re not familiar with the term, “cisgender” means having a biological sex that matches your gender identity and expression, resulting in other people accurately perceiving your gender.

If you are cisgender, listed below are benefits that result from your alignment of identity and perceived identity.

If you identify as cisgender, there’s a good chance you’ve never thought about these things.  Try and be more cognizant and you’ll start to realize how much work we have to do in order to make things better for the transgender folks who don’t have access to these privileges.  If you’re unsure of what it means to be “transgender” you can read about it.

Yes, much similar to White privilege, Male privilege, Heterosexual privilege, Ability privilege  and others, it does exist. Here are some selected examples.

24. Having your gender as an option on a form.

19 Be able to assume that everyone you encounter will understand your identity, and not think you’re confused, misled, or hell-bound when you reveal it to them.

3. Strangers don’t assume they can ask you what your genitals look like and how you have sex.

28. You don’t have to convince your parents of your true gender and/or have to earn your parents’ and siblings’ love and respect all over again.

4. Your validity as a man/woman/human is not based on how much surgery you’ve had or how well you “pass” as non-transgender.

5. You have the ability to walk through the world and generally blend-in, not being constantly stared or gawked at, whispered about, pointed at, or laughed at because of your gender expression.

29. You don’t have to remind your extended family over and over to use proper gender pronouns (e.g., after transitioning).

7. Strangers call you by the name you provide, and don’t ask what your “real name” [birth name] is and then assume that they have a right to call you by that name.

9. You have the ability to flirt, engage in courtship, or form a relationship and not fear that your biological status may be cause for rejection or attack, nor will it cause your partner to question their sexual orientation.

11. Your identity is not considered a mental pathology (“gender identity disorder” in the DSM IV) by the psychological and medical establishments.

7. Strangers call you by the name you provide, and don’t ask what your “real name” [birth name] is and then assume that they have a right to call you by that name.

18. Hollywood accurately depicts people of your gender in films and television, and does not solely make  your identity the focus of a dramatic storyline, or the punchline for a joke.

30. You don’t have to deal with old photographs that did not reflect who you truly are.

Read the rest of the list they’ve compiled here.  Also See “On Being an Ally”.