On “Loving Day”: Did You Know?

Mildred and Richard Loving were charged with violating Virginia's Racial Integrity Act.
[dropcap]D[/dropcap]id you know that on this day in 1967, The Supreme Court of the United States ruled to legalize interracial marriage throughout the country?

From the Ruling of the Loving V. Virginia Case:

MR. CHIEF JUSTICE WARREN delivered the opinion of the Court.

This case presents a constitutional question never addressed by this Court: whether a statutory scheme adopted by the State of Virginia to prevent marriages between persons solely on the basis of racial classifications violates the Equal Protection and Due Process Clauses of the Fourteenth Amendment. [n1] For reasons which seem to us to reflect the central meaning of those constitutional commands, we conclude that these statutes cannot stand consistently with the Fourteenth Amendment.

In June, 1958, two residents of Virginia, Mildred Jeter, a Negro woman, and Richard Loving, a white man, were married in the District of Columbia pursuant to its laws. Shortly after their marriage, the Lovings returned to Virginia and established their marital abode in Caroline County. At the October Term, 1958, of the Circuit Court [p3] of Caroline County, a grand jury issued an indictment charging the Lovings with violating Virginia’s ban on interracial marriages. On January 6, 1959, the Lovings pleaded guilty to the charge, and were sentenced to one year in jail; however, the trial judge suspended the sentence for a period of 25 years on the condition that the Lovings leave the State and not return to Virginia together for 25 years. He stated in an opinion that:

“Almighty God created the races white, black, yellow, malay and red, and he placed them on separate continents. And, but for the interference with his arrangement, there would be no cause for such marriage. The fact that he separated the races shows that he did not intend for the races to mix.”

The Fourteenth Amendment requires that the freedom of choice to marry not be restricted by invidious racial discriminations. Under our Constitution, the freedom to marry, or not marry, a person of another race resides with the individual and cannot be infringed by the State. These convictions must be reversed.

It is so ordered.

I encourage you to check out the entire ruling for yourself: 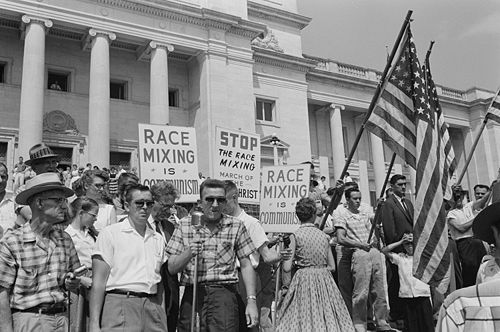 Although interracial marriages were legalized 46 years ago, for some, the idea of interracial marriage, or even interracial relationships can still be a source of conflict institutionally and interpersonally. The social media backlash surrounding this Cheerios ad also demonstrates that in many ways, we still have a long way to go…

I also see the Loving V. Virginia case as an important social, political, and historical landmark to consider as the Supreme Court struggles to answer the question of whether or not the time is right to grant marriage equality to same-sex couples.

What do you think? Were you young enough, or old enough to remember when Loving V. Virginia was passed? Paint a picture for us about what was going on in your world during this time. If you weren’t, what are your thoughts on the case? Is this the first you’ve ever heard of Loving V. Virginia?

Are you someone who is currently in, or has been in an interracial relationship and/or know of someone who has? Have you encountered some of the notions that made the Loving V. Virginia ruling necessary?

Can you make the connection between Loving V. Virginia and the issue of same-sex marriage in our contemporary times?