We Are Not Beholden To Our “Allies”

If you’re working in solidarity with an oppressed group, and cannot accept the truth as they tell it, then you were never really an “ally” in the first place.

I’ve been hearing a lot more criticism lately about the Black activists who interrupt politicians like Bernie Sanders, Hillary Clinton, and others at their speaking engagements by applying pressure for them to have a more explicit focus in their actions, as well as their words as it relates to #BlackLivesMatter.

Out of many of the responses I hear, a message that is particularly triggering to me involves telling people who are Black, that calling politicians  who are supposedly “already on their team” to task on their inaction on issues related to racial justice could cause them to withdraw their support.

Are you kidding me? 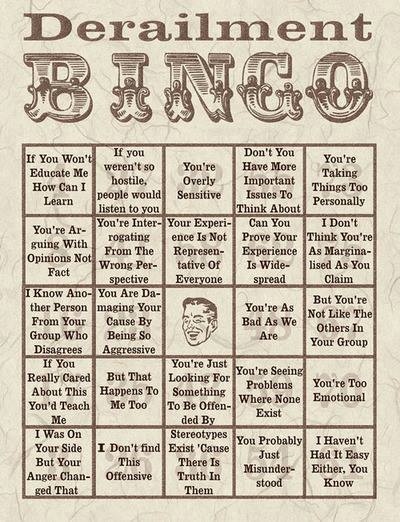 One problematic notion that often surfaces in conversations about racial justice is the idea that people who are Black need to monitor their tone. That they should communicate in a way that is non-threatening to people who are white in order to make sure their words are understood.

This notion corresponds with the space on the Derailment Bingo board that says:

“I was on your side, but your anger changed that.”

First, past actions of support do not justify current inaction or complicity. Second, a dynamic that is dependent on the silence of marginalized people, or the tempering of their feedback because of the fear of their supposed “allies'” withdrawal of support further perpetuates their oppression.

Working in solidarity with an oppressed group requires a serious commitment, including a willingness to hear the truth from members of that group about yourself, and about your complicity with their oppression.

Here’s the thing. If you are a person who is white who is truly concerned about racial justice, you need to really ask yourself why you’re in it.

If being called out in a way that doesn’t pat you on the back, and cater to your need to be seen as a “one of the good ones”; if being told that what you are doing is problematic, that you aren’t doing enough, or that you need to change directions is “the thing” that would cause you to withdraw your support, then you were never an “ally” in the first place.

We are not beholden to our “allies”. We do not owe them anything. Do your own work or move out of the way.