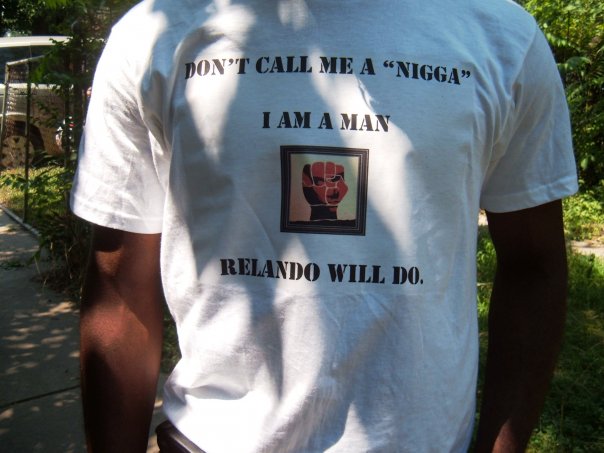 The shirt reads “Don’t call me a “Nigga”. I am a man. Relando will do.”  The photo was taken in 2006, and I made the shirt myself. There’s a fist in the middle with a face that is supposed to resemble Huey Newton.

I had all but forgotten about this shirt until the news of comedian Larry Whilmore’s use of the word “nigga” in reference to the President at his last correspondent’s dinner and the varied reactions took me to a time in my youth where I was at the height of my frustrations with the word.

I would get into fights with friends who’d use it in reference to me, I’d thrown away any music with reference to it, I was hard-core. I can even say that I lost some friendships over it.

Even though I’ve learned to respond by replacing an angered response with a compassionate one when I hear other Black folks use it, I am still unable to separate the adapted use of the word nigger to nigga from its historical use as a tool to oppress us.

How we choose to cope with and survive within a racist system can show up differently for each of us. I recognize and respect the fact that some folks think replacing the ‘er’ with a ‘ga’ is a way to reclaim it, that it’s a term of endearment now, and that using it is a way to take the power back.

I’m not interested in shaming anyone for the ways they choose to cope, or even attempt to move on from the ways white supremacy impacts their psyche. I’m just sharing that I am unable to do so in this way.

Words have power, and can change meaning over time. Different words spelled the same way can have different meanings. Here and hear sound the same but mean different things. So does there, their, and they’re. However, this goes far beyond semantics to me.

I’m not saying that it’s impossible for other people to feel like they are able to reclaim something from using the word “nigga”, I’m just saying that I don’t feel any transferring of power at all through its use.

Although it’s no longer socially acceptable in many spaces to outwardly call black people niggers, I can still hear, see it, and feel it in the ways white supremacy continues to be reinforced through structural racism.

I can feel it when I think of the growing list of things you can’t do while black.

I feel it in the ways racism makes me question every single aspect of my life.

I feel it when I think of Oscar Grant, Troy Davis, Trayvon Martin, Sandra Bland, and so many others. 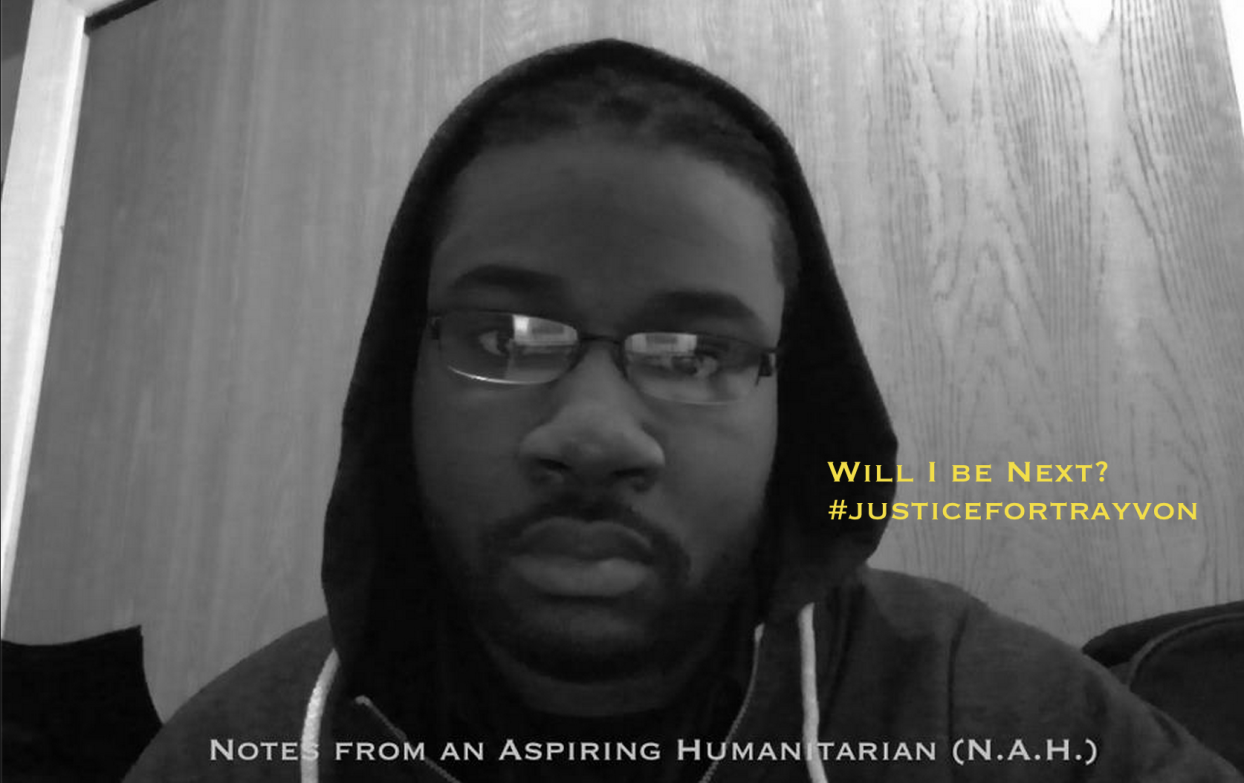 I feel it in the mourning process, again and again in an almost a constant state of mourning over our deaths.

I feel it in the ways we are blamed for our own deaths, and the ways we are told to modify our movements and actions to prevent them in ways that white people just don’t experience under the same conditions.

I feel it when realize that it could have been me, and still could be me.

I felt it on one of my first days of teaching at a predominantly white institution when, as I began to start class, one of the white students said “Hey, shouldn’t we wait for the professor to get here?”, and still feel it as I help my Black students to channel their anger as I work to channel my own.

I feel it in the fact that predictions can be made on health outcomes based on zipcode, largely resulting from the effects of racial discrimination and segregation.

I feel it in the ways the conversation on the war on drugs and the effects of drug use is changing from the ways they have been commonly had now that there is a larger recognition of white people’s use of heroin.

For these and so many more reasons, I just can’t embrace it. It doesn’t matter how Larry tries to explain it, how many woke scholars try to explain it, or anyone else.

It’s not about “respectability” to me, because I recognize that if you’re Black, regardless of one’s palatability to whiteness, the threat of physical, emotional, or other harm or even death, is always present.

“The saggy pants of today were the backward caps of yesterday, the Afros of the ’70s, the jazz music of decades ago.

The irony is that respectability politics tell black people that racism isn’t a problem — their race, defined solely by its negative connotations, is. If that’s the case, then respectability politics are self-defeating. No matter how high the pants or accurate the toss of a bottle into a trash can, a black person cannot stop being black, and cannot start being “respectable.”—From Don Lemon and the Failure of Respectability Politics

It’s not about positive thinking because I can be having the best day, be in the best mood, and still be impacted by this. If not me, then someone close to me, or even those who I don’t even know, yet we are tied together by the bond of trying to survive as interchangeable bodies and faces in a racist system. So don’t say “if you don’t believe it’s about you then it won’t impact you” because although it’s about how I feel personally, it’s larger than how I feel personally.

If you use it as a term of endearment, this note of expression doesn’t mean I don’t love you and it doesn’t mean we can’t still talk. Certainly not. It just means that I disagree.

For me, there are too many reasons not to embrace it. For me, beyond its historical use, and making connections to its oppressive impact on Black people in the current day through programs, laws and policies that go beyond individual acts of meanness, I’ll never be here for the N-Word in any of its forms.

(Note: some of my readers who are white, may be tempted to comment your opinion on this. Don’t. Instead, look through these and if you find anything related to racial justice, share it with those close to you or those who have other forms of authority and talk about ways you can resist being complicit with white supremacy.)