“How Does it Feel to be a Problem?”

“To the real question, How does it feel to be a problem? I answer seldom a word….being a problem is a strange experience, — peculiar even for one who has never been anything else”—W.E.B. Du Bois from The Souls of Black Folk.

It was a cold and rainy saturday morning for sure, but we were in a rush. It was a budding point in my partner’s career, and we were preparing to walk out the door. She had a very important exam to take that day, and I wanted to make sure she arrived at her destination on time.

I was wearing jeans and a gray hoodie.

Rushing as we were, it has never been a good idea in either of our experiences to take a lengthy exam on an empty stomach, so we decided to take a quick stop at a local bagel shop to pick up something for her on the road.

The rain was really beating down when we arrived at the store. Neither of us had an umbrella at the time, so before I opened my car door, I pulled the hood from my hoodie over my head.

It’s noteworthy to mention that we were among a handful of people of color in a community that was inhabited predominantly by people who were white.

“Please don’t go in there with your hood on” she said.

“It’s raining. This situation right here is exactly what hoodies were for” I thought to myself.  Although I already knew the answer to this question, in my own indignation I decided to ask her why.

“Because you’re a Black man in America.”  That was it.

I was no stranger to that answer though. 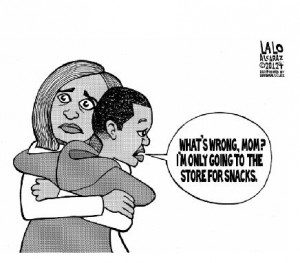 As I mentioned in one of my notes from the first year of this blog, a great deal of my socialization regarding my racial identity involved training to ensure that I knew how to make myself appear as less threatening to people who were white as possible for my own safety. I was told to be careful because there would often be a sense of presumed criminality, not belonging, danger, etc.

That I’d be presumed to be a problem.

I’m not the only one to have to go through this type of survival training, and I understand the reasons behind it. I am probably still here today because of much of it.

However, I still feel that there is a sense of dignity, safety, and overall humanity that is lost in the act of having to constantly be aware of oneself in this way. In a constant state of alert: “shrinking” and expanding, or rather not fully expanding unless in certain safe and trusted circles.

It is from this place where I mentioned asking “why” in indignation. Not resentment at my partner, but resentment at the belief systems and power behind them that created the reason for her to even have to ask me that question.

I removed my hood, we both walked into the store drenched from the rain and ordered some sandwiches.

As we waited on our food, in walked a person who was white, wearing jeans and a gray hoodie with the hood pulled over his head. He ordered a bagel and left the store.

As the bells that were tied to the door rang out after it closed, I looked at my partner, she looked at me, and we both knew. We both shared a silent moment of unspoken understanding…..

And so does your zipcode

At one time in my life, my work involved me visiting families where they lived. I would be allowed inside their homes, get to know them and their concerns, and find ways to connect them with valuable resources necessary to meet their needs.

I’ve worked in urban areas, suburban and rural areas and have witnessed sickening disparities in terms of access and resources among places just a few blocks away from each other.

One day during this period I keenly remember pulling up to a house to visit a family who happened to be white in an affluent suburb.

I’d gotten all but five steps away from my vehicle when I heard a shout asking me:

“Do I need to call the police?” “What are you doing here?” 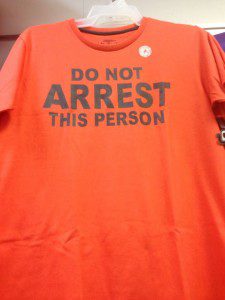 Despite the fact that we’d spoken on the phone earlier that day to confirm the appointment, those few moments explaining why I belonged there were pretty intense.

I sounded “different” on the phone.

One thing about racism is, whether dressed in jeans and a hoodie, or in a business suit, it’s not always just about how you look.

It’s about how you look.

Following the process of the  Travyon Martin case gives me cause to contemplate my own mortality.

One of the troubling realizations about Trayvon’s murder is that it could have been me, my brothers, nephews, unborn children or friends and it still very well could be.

As I sat and watched the ruling of the case last night I was reminded of the power behind the institutional belief that Black life does not matter. I was shown much better than I could be told.

From Emmett Till to Oscar Grant, from Troy Davis to Trayvon Martin, and all the others before and in between..it communicated to me that my nephews lives, my brothers’ lives, my life, and black and brown lives all over just don’t matter…that if we were to be murdered the burden would be on our families to prove why we should have lived.

I’ve read stories that have said places are bracing around the country for riots since George Zimmerman was not convicted which seem to be concerned about retaliation among people of color.

What I’m more concerned about is the possibility of more attacks against young black males based on racial profiling using this case as support.

What are your thoughts?

Because I’m desperately trying to figure out what year this is, and my math is just not adding up to what’s actually taking place….because history is telling me that I shouldn’t be surprised…because the criminal injustice system is doing exactly what it’s designed to do…because “A system cannot fail those it was never built to protect.”,