On Being Called Out: Shut Up and Listen, Or, Resistance is a Choice 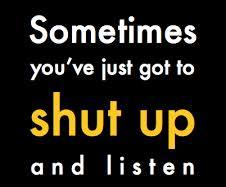 I would hear that rhyme often as a student in Mr. O’Leary’s social studies class in high school. In the years since then I’ve found it to be something helpful to consider when working with groups in which society is set up to promote parts of my identity at the expense of theirs, even more so when it comes to being called out.

Sometimes, you’ve just got to shut up and listen

For instance, I serve in an organization dedicated to working against gender based street harassment which for me involves working with women, while also working with men to challenge sexist thought processes and behaviors. As a man, I come into that situation with an inherent level of unearned privilege that women do not.

Sometimes when engaging with “well-meaning” men, I encounter a sentiment that ultimately results in tone policing women’s responses to something they have experienced.

Saying which approaches are foolish and which are not, especially as a privileged person who sees themselves as trying to help, can come off as dismissive and serve to perpetuate the same kind of issues you would say that you work against. 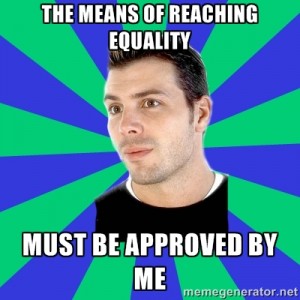 To me, part of working to be an ally involves listening to the issues and not dictating the argument. As a man if I say that I’m trying to help, I can’t go before a group of women and tell them what the issues are, which of their responses to sexism are appropriate or not, etc because men have been doing that since the beginning.

In this space, it’s not a matter of whether I’m “right” or not, as much as it’s a matter of I don’t get to decide that. They do, and my role in that would be to act accordingly in terms of what I do for, and how I treat other women, and how I engage with other men.

To me, to do otherwise would be to recreate an oppressive dynamic rendering me as just another man who says he gets it, but doesn’t. And sometimes that may be the case because with privilege comes areas of deficiency that those who have it can’t necessarily perceive.

Resistance is a Choice

The intent of an action doesn’t negate its impact. So if a woman does bring up some sort of inconsistency between what I’m saying, and what I’m doing without holding my hand, (where I say I’d like to help, but my actions are actually resulting in me flexing my privilege and contributing to the problem) I could very well dismiss that feedback, take it as an attack on me personally (and possibly attack back), and continue to go about my day not having to involve myself either physically or mentally with her issues and concerns. 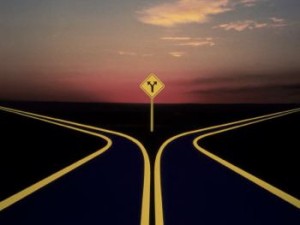 I could shut down. I could also take a mental break from it all, which would be my choice and my privilege: options she doesn’t even begin to have access to.

Do something different. Don’t get defensive.  Shut up and listen, learn, and make changes.

However, I think there needs to be a different type of response from someone who would wish to be an ally than from someone who has not resolved to make conscious efforts to work against oppression.

I could also choose to listen to what’s being said, get to the bottom of why I might feel so challenged, afraid or uncomfortable, and possibly discover a place of ignorance I didn’t know I had. An area I couldn’t have known that I had because I was trained not to know it exists.

This same dynamic exists across the spectrum of people with targeted social identities and their would be allies.

I remain grateful to the folks who have parts of their identities in which I’ve been in a position of unearned privilege while they were not who have highlighted my inconsistencies or areas I might not be paying attention to because privilege can be a prison that creates barriers to communication and keeps people from living the authentic lives they would say that they wish to lead.

Those incidents have and will continue to (because they will happen again and again) center me and cause me to ask myself “am I here for the right reasons, or am I here so I can create some distance between me and those “other” people in my social group to make myself feel better?

There really is no separation. I can’t escape the benefits that come with male privilege, heterosexual privilege, etc but I can decide how I leverage those benefits. And a part of that decision process involves listening to those it has been used against.

A Great Read: Allies Who Are Not Allies

If I’m getting feedback from a population that I wish to serve that tells me my thought processes or actions are not being helpful, do they really not know what they’re talking about, or am I missing something? Are they just overreacting or is there something I need to change?

These last two questions in particular are questions that I find myself having to ask (myself) in contexts where I posses some privilege and would say that I would be an ally, and the answers are always the latter.

Do something different. Don’t get defensive.  Shut up and listen, learn, and make changes.