I found this photo online and wanted to share it with you. Although some might see an element of satire in this photo, the message is quite serious.

The Ad is from two campaigns called This Is Not An Invitation To Rape Me and Not Ever that support victims of rape and serve as a resource to educate the public and raise awareness. 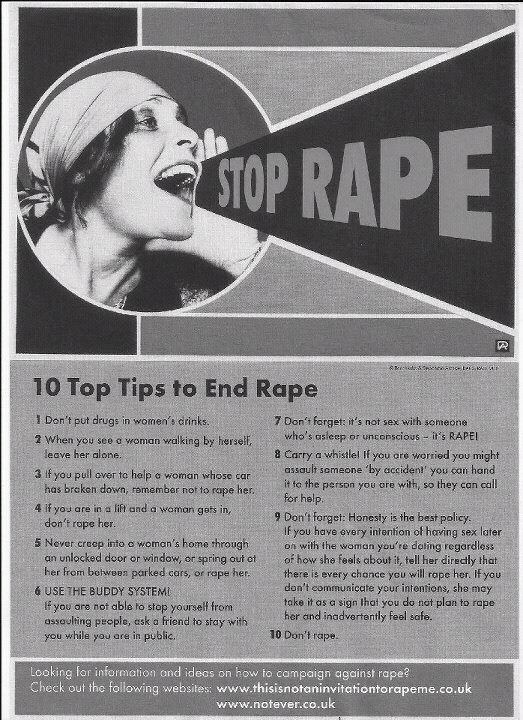 Having trouble reading the picture? Here’s what it says:

2. “When you see a woman walking by herself, leave her alone.”

3. “If you pull over a woman whose car has broken down, remember not to rape her.”

5. “Never creep into a woman’s home through an unlocked door or window, or spring out at her from behind parked cars, or rape her.”

6. “USE THE BUDDY SYSTEM! If you are not able to stop yourself from assaulting people, ask a friend to stay with you while you are in public.”

7. “Don’t forget it’s not sex with someone who’s asleep or unconscious-It’s RAPE!”

8. “Carry a whistle if you are worried you might assault someone “by accident” you can hand it to the person you are with so they can call for help.”

9. “Don’t forget: Honesty is the best policy. If you have every intention of having sex later on with the woman you’re dating regardless of how she feels about it, tell her directly that there is every chance you will rape her. If you don’t communicate your intentions, she may take it as a sign that you do not plan to rape her, and inadvertently, feel safe.”

I think it is very common to take part in victim blaming when it comes to street harassment, rape, domestic violence, and other forms of sexism. We’ve heard the common questions that perpetuate victim blaming and shaming like “what was she wearing/what was she doing?” or “why does she stay?”

Instead of asking “why does she” do X, Y, or Z, I think it’s important to focus on addressing male privilege and the assumptions that make it okay for men to perpetrate violence against women.

What are some ways that you think men can work against violence against women?

What roles can men play in challenging sexism?