Respect Others’ Way Of Thinking 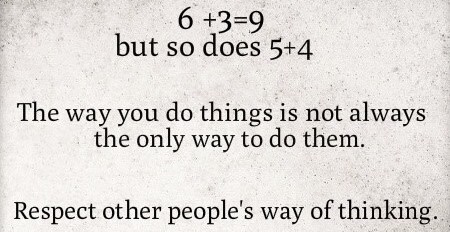 I love coming across messages that make me stop and think, and this was one of them. I started my Pictures With A Purpose category with the intention of collecting thought-provoking imagery, and the quote in this image has definitely earned its’ place in that category.

I really love this message! What are your thoughts?

For further exploration, here are 10 notes about considering others’ experiences:

On Communication: Debate vs. Dialogue

On Communication: Duplicates vs. Complements

Getting In Our Own Way: 2 Barriers We Contribute To That Limit Social Change

Treat Others How They Want To Be Treated

Putting It All In Perspective: The Pale Blue Dot

When Things Aren’t Working Properly, Invest Some Time In Unclogging The Pipes

On Internalized Racism: Moving From Anger To Compassion

Respecting Diversity In The Classroom & Beyond: Multicultural Guidelines