Playing Oppression Olympics Gets Us Nowhere On the Road to Equity

This is a comment I posted from last week’s post in response to one of my readers who was uncomfortable with the LGBT community comparing their unequal treatment to the plight and historical struggle of Black people in America, citing that “It’s simply not the same.”

In case you missed it, take a quick moment to read Video: Pastor’s Speech on Gay Rights has Interesting Ending to get caught up.

I’ve added a couple of points since my original statement:

Thanks for sharing both your comment and your discomfort here.

I think If we’re going to have honest movement toward truth-telling and reconciliation in addressing issues of inequity, I don’t think we can be truly honest about dealing with inequity without addressing racism.  I think If we look at any ism across our other social identities through the lens or race, the outcomes and experiences can be significantly more challenging, and as you’ve said, there’s a historical component to racism that plays a role as well.

Sometimes when comparisons come into play, those comparisons may cause us to feel as if our experiences are being invalidated.

To me, looking at people in the LGBT community as being entirely separate in that comparison excludes the experiences of people of color in that community who have to learn to survive with racism, and deal with homophobia and other effects of heterosexism that can come from people who are white, and institutions run by people who are white, as well as from other people of color within their own communities.

One of the things that I appreciated about seeing this video personally, is the way the speaker highlighted how religion has been used historically to be oppressive to people of color, and how he was able to make another connection about how it has also been used to oppress people who are Lesbian, Gay, Bisexual and Transgender.

I think a lack of awareness of this connection only serves to perpetuate the problem, and can put us in a position of oppressing others (or members of our own communities) as we’ve been oppressed if we’re not careful.

In an effort to continue to make connections to civil rights for People of Color and people who are Lesbian, Gay, Bisexual, and Transgender, one way that I see a lack of awareness of this connection played out is in some churches in communities of color where safety can be lacking or non-existent for people of color who are also Lesbian, Gay, Bisexual or Transgender.

I understand that communities of color are not monolithic, and despite the NAACP’s stance on supporting the rights of same-sex marriage,  some clergy of color are passionate about limiting this right to hetersexual couples.

Speaking out against racism on one hand, while openly advocating for the limitation of the rights and freedoms of others based on how they identify along sexual orientation and gender expressive lines ends with the result of wronging others while trying to “right” wrongs that were done to you.

Playing Oppression Olympics gets us nowhere on the road to equity.

Oppression Olympics is a term used to describe instances where groups compete or debate about which group has been oppressed the most. “Who has it hardest?” It ignores the fact that it’s possible for multiple groups to be oppressed at the same time. 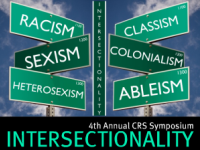 It’s this kind of thinking that can fuel separatism and discourage collaboration.

Parts of our identities place us in positions of privilege, while we may be vulnerable to oppression  because of other parts of who we are, so the concept of intersectionality is an important one to keep in mind, especially for coalition building.

I thought it was appropriate to mention due to the polarizing nature of the notion of “comparing” the oppression of people of color and people in the LGBT community, but be wary however, because using  intersectionality as a tool to engage in oppression olympics can be used to derail difficult conversations  about one kind of oppression by denying its importance, legitimacy, or existence, and ultimately serves to silence people who are a part of the oppressed group being discussed and shift the focus of the conversation to another aspect of oppression that highlights the pain of the person who may be privileged in one aspect of the conversation at hand .

Here are a couple of additional posts that I believe would be useful for further discussion:

On Being an Ally from wanderinginlove written by Dr. Sarah Jackson

I leave you with a quote from Audre Lorde, writer and activist. 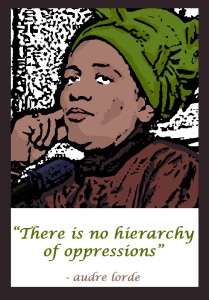 “I was born Black, and a woman. I am trying to become the strongest person I can become to live the life I have been given and to help effect change toward a liveable future for this earth and for my children. As a Black, lesbian, feminist, socialist, poet, mother of two including one boy and a member of an interracial couple, I usually find myself part of some group in which the majority defines me as deviant, difficult, inferior or just plain “wrong.”

“I simply do not believe that one aspect of myself can possibly profit from the oppression of any other part of my identity. I know that my people cannot possibly profit from the oppression of any other group which seeks the right to peaceful existence. Rather, we diminish ourselves by denying to others what we have shed blood to obtain for our children. And those children need to learn that they do not have to become like each other in order to work together for a future they will all share.”

We are all teachers and learners. That was one response, what’s yours?