Remember that sesame street video? Click on the image to hear the song..

Re: “Can I touch it?” The Fascination with Natural, African-American Hair 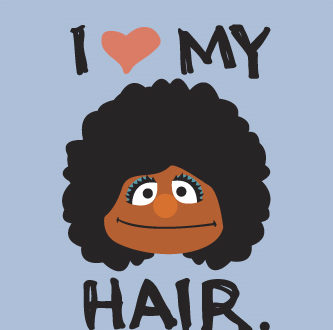 Remember that sesame street video? Click on the image to hear the song..

When I walked into work this morning, one of the students I worked with showed me an interesting article titled “Can I touch it? The Fascination with Natural, African-American Hair that touched on an experience that can be all too common for some African-Americans who choose to wear their hair natural.

In the article, an experience had by writer Tamara Winfrey Harris was recalled in which she narrowly escaped a random petting by a curious, middle-aged, white woman.

“She missed by mere seconds, she was actually going to grab my hair as I walked past her,”

“It’s a common tale shared by women of color whose natural hair can attract stares, curiosity, comments and the occasional stranger who desires to reach out and touch. The reaction to such fondling can range from amusement to outrage over the invasion of personal space.”

One colleague of mine who, in sharing her frustrations after having had this experience several times would just say “No! This is not a petting zoo!”

After reading the article together, this student, who identified as being a person who was Indian then asked me if people, or even more specifically people who were white have ever tried to touch my hair before…

It didn’t take me very long to say yes. Sometimes, at least in my experience the touching, or attempted touching has been accompanied by questioning.

As one African-American male who locks his hair, these are some examples of questions or comments I have received from people who are white about my appearance.

“How long does it take to do it? I wish I had all that free time on my hands.”

“Hey, you wear your hair just like the black football players”

“Are you from Jamaica?”

“Bob Marley!! You know, I just think that Bob Marley was such a Revolutionary. I love his music.”

Lets face it, whether their hair is straightened or not, African-Americans and other people of color face challenges in carving out standards of beauty for themselves in society. For those who decide to wear their hair natural, additional challenges can show up in their everyday lives.

This video produced in 2008 by Kiri Davis entitled “A Girl Like Me” hits on some of the struggles young African-American women can face in defining themselves and their realities against societal standards.

In terms of beauty and appearance, I still encounter the conscious and unconscious assertion that lighter is better, whiter is better and the closer one is to that ideal, the greater the value they will have in society.

I am also aware of the perceived importance of having straight hair.  From experiencing being teased as a child by other African-American children for being of a darker complexion, to watching children that I grew up with lament over how “nappy” their hair was, to being told that I would not be able to get a job because of my decision to lock my own hair, I see the idea of this perceived inferiority to whiteness as being still prevalent. 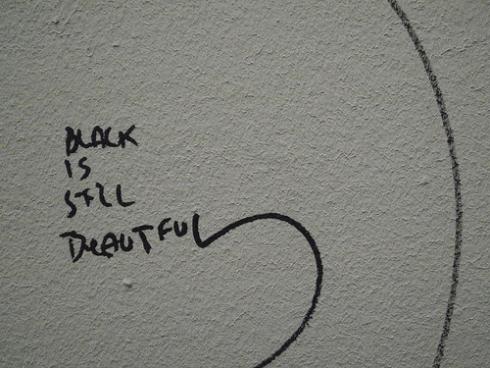 We are taught misinformation about ourselves and others.

As you may have seen in the video, and as I see in my daily life, unfortunately, some people of color can internalize the negative messages they receive about themselves and act out that internalization out in a variety of ways.

I’ve always liked having a lot of hair on my head. I can remember being in high school (when my locks were but a small afro) and being approached by one of the sports coaches, who was African-American.

“Its alot of girls out here. You should cut that off boy, you aint’ gonna get any of these young girls around here with your head like that, and good luck getting a job.”

Just as I came to understand that my manhood was not and is not defined by the amount of “currency” I have, (in the form of women) and the amount of women I “conquer”on the unwritten, yet strongly defined road of sexual conquest that some men are socialized to see as a mandatory prerequisite to defining their own value, I also came to understand that I had been taught a great deal of misinformation about my racial identity as well.

For me, having the opportunity to be exposed to what I saw as  positive real live examples of people and situations  which challenged that misinformation is what led me to challenge things myself.

However, the reality is,

Some might see the coach’s words, particularly the part about me not being able to get a job as being a protective factor because for many, society does hold a view of a “certain kind” of look that defines what is “right” and “professional” and, in this writer’s opinion, many people of color can find themselves outside of that defined standard.

As a result fears both real and perceived about being discriminated against based on outward presentation can lead some to think, say, or do things which (although sometimes harmful to ourselves or others) are meant to minimize the instances and impact of that discrimination.

Where aspirations to become a better humanitarian can factor in

Our communities are still very segregated, and we can sometimes be either unwilling or unable to interact with those that are different from ourselves. The level to which we can avoid or ignore one another without experiencing any consequences greatly depends on our level of privilege.

In engaging in conversations with people who were white who have had questions about my hair, aside from reminding myself of certain realities that can usually give me a strong foundation from which to begin, I also try to assume that people are trying as best they can.

However, as I’ve discussed with friends, family members, and colleagues alike, consistently being in situations where one is either among a few, or the only person of color being looked upon to take advantage of “teachable moments” can be physically and emotionally draining at times, because it can put an undue burden on the targeted person to be seen as a representative  of their group. 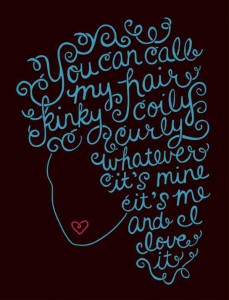 Parts of our identities can place us in a position of privilege, while others can leave us vulnerable to discrimination. I believe that in areas in which we are privileged, there are ways we can seek out information about oppressed groups to increase our own understanding without putting a burden on the individual to speak for their own group. This is where Allyhood can play a pivotal role.

One example of working against the misinformation around the idea that blackness and natural hair automatically spells doom and gloom in the work world can be found in the “Naturally Professional Series” on curlynikki.com. This series was

“created to make a positive statement. Our intent is to disprove false and long held beliefs that wearing ones hair in a natural style — including locs, sisterlocs, and loose natural hair — makes a person somehow not professional enough for a corporate environment. Natural hair IS professional, beautiful, well taken care of, and welcome in any kind of workplace.”

People of color choose to wear their hair natural (or not) for a variety of reasons. One task that I feel must continue to be taken on is to help young people of color, permed hair or otherwise to develop and maintain a positive sense of self into adulthood, and to show them counterexamples to some of the popular but negative messages they receive.